Today (or yesterday, because I’m getting this up a tad late) is the birthday of French social critic and author François-Marie Arouet, born in 1694. A writer of great range and wit, he militated against the excesses of the Catholic church and advocated for religious tolerance and freedom at a time when there was little of either. He wormed around the tyrannies of his father so he could write poetry, had a sweaty, scandalous affair with a woman with the bracing name of “Pimpette,” and was tossed into the Bastille for a year. After his release from that infamous prison, he adopted a new name, which manifested as a reversal of the syllables of his family hometown of Airvault: Voltaire.

He wrote: “It does not require great art, or magnificently trained eloquence, to prove that Christians should tolerate each other. I, however, am going further: I say that we should regard all men as our brothers. What? The Turk my brother? The Chinaman my brother? The Jew? The Siam? Yes, without doubt; are we not all children of the same father and creatures of the same God?”

Cult murderer Charles Manson died on Voltaire’s birthday. I wonder which of the two famous ex-cons is more familiar to the average American.

On the face of it, Voltaire (or Charles Manson) would seem to have little connection to my experiences with Kindle Direct Publishing (KDP) and publishing my novel, The Language of Bears. But if you look a little deeper, you find there is no connection whatsoever.

When last we visited the saga of my efforts to use KDP, I had crept deep into the dark side streets and menacing alleyways of my tax status, which, it seemed to me, owing to my status as an American ex-pat living in Japan for seventeen years, fatal to my dream of finally publishing my novel. My perception was that if I were living in the U.S., I could publish it, and if I were a non-American living outside of America, I could publish it, but as an American living outside America, I could not. Even if I were able to publish, the opaque texts seemed to hint, I would be charged a 30% tax rate and need to acquire, via a convoluted, incomprehensible process, an exotic taxation number.

However, I WAS WRONG!

Because I have the attention span of a fruit fly, I had misinterpreted the meanings of “U.S. Person” and “non-U.S. Person.” My mistake was revealed to me when, after rooting around again the following day in the tax-related links on the KDP site, I found this: 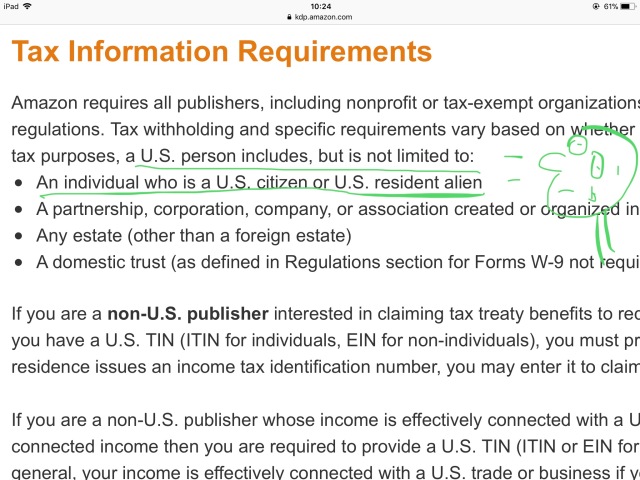 Note the line that reads, very clearly, “…a U.S. person includes, but is not limited to, an individual who is a U.S. citizen…” which would, according to my blue passport, describe me. In my own defense, the terminology is a bit vague and potentiates multiple interpretations. Plus, see above the bit about fruit flies.

So, I was at last able to enter the tax information, and all the remaining tasks with Step One of the four required steps for self-publishing went smoothly thereafter.

Step Two
It is probably worth mentioning here that when you’re getting started, KDP gives you a choice of getting, on the one hand, step-by-step guidance in the form of a service called KDP Jumpstart or, on the other, “Learning on Your Own.” KDP Jumpstart provides detailed directions in plain English, and even provides video instructions for those authors of books who can’t read. 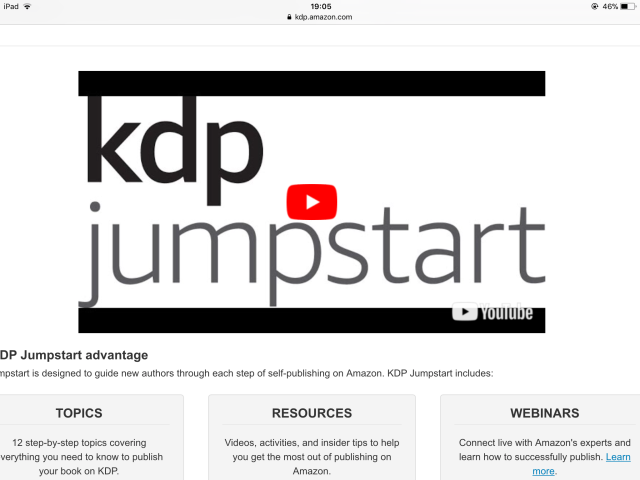 It goes without saying that no human male possessing normal testosterone levels would choose to have his hand held through this process and would instead select the bold, manly “Learn on Your Own” jungle path instead of the non-adventurous, sissifed “Step-by-Step Guidance” offered by KDP Jumpstart.

After I chose KDP Jumpstart and finished, after a few hiccoughs of asininity, Step One, I ventured forth onto Step Two, tingling with something approaching confidence. Step Two is Book Details. This process is fairly straightforward, although I would later work out that I’d made some poor choices. See if you can spot them. I was asked to supply sundry nuggets of information In the user-friendly template, including number of pages, volumes in a series, etc. Note the part about a “subtitle” for the novel’s title (see photo below). I had it in mind the more words that I put into the title, the more people would find my lovely book. I also had an urge, of admittedly esoteric motivation, to include the word “polyps” in my title. My notion, hazily formed, was that most searchable keywords were used by millions of other authors, so I should choose search words that few people were using. And an obscure word like Polyps seems to fit the bill nicely in this regard. If a guy (or gal) looked up on Amazon books about polyps, my book would appear at the top of the page! Because how many books about polyps could there be? 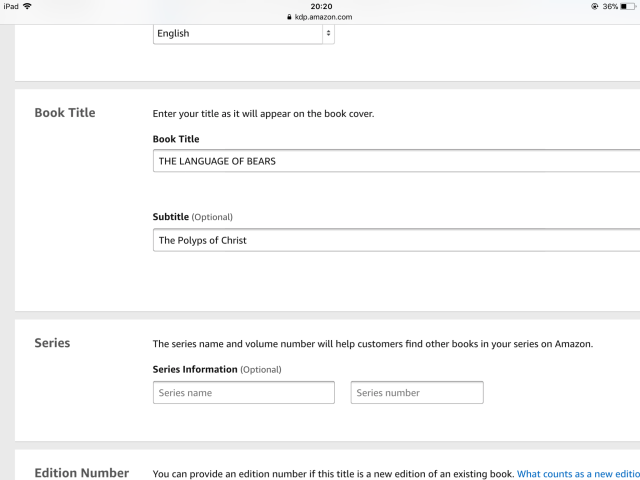 Of special interest further down the page is the keywords you are asked to enter. These are the words that are linked between prospective book-buyers and your book. I didn’t think this part out too carefully, despite the copious amount of supportive video and articles KDP provides the novice with ways to most effectively select their keywords. I confess that out of excess haste I didn’t read even a word of the helpful information or watch the video the first time round; I just put in the words I thought would be best:

Oops, running out of time again.

I started this post with a short description of Voltaire and I stated that no connection existed betwixt my novel and Voltaire. But I lied. The connection is there, however oblique. Voltaire lived at a time of social upheaval in Europe, which pitted, generally, on the one hand, an old guard marked by stoneheaded intolerance for religious and other freedoms against, on the other, radicals, such as Volaire, who advocated for said freedoms and social policies to be enlightened by philosophical and scientific knowledge (hence the name scholarship subsequently applied to it: The Enlightenment).

Several decades earlier, in response to the intolerance Voltaire would later oppose, several groups persecuted for their unconventional religious beliefs chose to leave Europe for the mysterious land of America. These included Quakers, who established the town of Philadelphia, and the Puritans, one famous incarnation of which came to be known to generations of schoolchildren as “The Pilgrims.” My novel proposes that, through a fantastic slippage into an alternate time/space dimension, a group of these New England Puritans continued on in their original state, living in a land that resembles somewhat the “utopia” or City on the Hill” they sought when they left Europe. There they have lived for 250 years, without disease, or crime, never at a loss in this fruitful land for adequate supplies of food, their culture and technology largely unchanged because pressures of want and conflict were largely absent, upset only by the kinds of charming small-townish issues you might find in Lake Wobegon. However, when the rancher Obadiah Broke tries to remove an unpleasant odor from the furs he is tanning by mixing apple juice (yes, a Garden of Eden symbol) with pig brains, he inadvertently opens a doorway between their Edenic world and modern-day America, leading to all sorts of drama and mischief as the original America meets the present one, culminating in the end of the world.