LOST IN THE LAND OF FORKS PART 2

(RECAP: In Part 1 of the dream I had recently, my conniving British partner was leading me back to my home in the Village of Humans when he had us stop in a village wherein lived a species of creatures who, because of their thin bodies, silvery color, and two tall, thin appendages rising skyward from each side of their heads, resembled forks. The Britishman apparently had perpetrated some crime, for within moments of our entering the village, we were encircled by enraged Forks, their tines crackling and glowing purple. My companion was knocked to the ground when the Head Fork leaned forward and used his tines to administer an immense electrical shock. The Britishman lay on the ground with smoke rising from his hair. The Head Fork then turned to me.)

Part 2
Just as I braced myself to be similarly electrocuted, the Britishman, who I thought was dead, gave out a loud gasp. He raised his head, looked blinkingly around. Suddenly he leapt up and threw himself through the wall of Forks surrounding him. A few of them fell and others leapt aside as he barreled through. His sudden bid for escape provoked howls of rage from the crowd of Forks, whose tines started snapping off furious bursts of green sparks. But by the time the creatures could collect themselves and pursue him, the Britishman had already sprinted too far away to catch.

Tines sizzling, they all turned to me. The Head Fork leaned forward, a very serious look on his face. I braced myself to be killed.

Instead of killing me, he spoke to me gently in English: “Are you okay, sir?”

He helped me to my feet and shepherded me into a nearby pub, where the Forks treated me with startling hospitality. They served me wine and filled me up with plate after plate of steaming, exotic dishes, all made from snails. The dishes without exception were more delicious than anything I had ever eaten before.

Plainly the dangerous fury they’d exhibited on the road was specifically to do with the Britishman and whatever past misdeeds the fellow had committed against them. Thankfully, the Forks were enlightened beings and didn’t mistreat all humans because of the bad actions of one of them.

Not only did the Forks treat me warmly but wished for me to stay with them. The Head Fork (In the dream, he had no name I can recall, but for sake of convenience I’ll call him Charlie) invited me to live in an apartment in the upper floors of the building he owned and even offered me a job working in his restaurant on the first floor. Given I was broke and had lost my guide home, I saw no reason not to accept Charlie’s offer.

At this point a lengthy segment of the dream disappeared into the ether when I woke up, but I remember enough to know the following:

1. I worked for several months at the restaurant. I call it a “restaurant,” but in several ways it was unlike any human restaurant. First off, it not only served food and drink, but also sold a range of household wares, along the lines of what you would find at both an electrical shop and a home furnishings store. There was also a kind of gambling parlour centered on one game of chance/skill called Krischtmascht (more details about this game are provided below). As for the sales area that sold household wares (at which I worked for some time in the early days and learned much of the Forkese language), I never determined the purpose of most of the gadgets and home accoutrements even as I sold them.

Suffice it to say their shape and design suggested multiple purposes. For example, one very popular product was a kind of long pole called a ringrang, fashioned from a cluster of slender rods about ten feet in length, all glued together to form a thicker pole, from whose ends dangled innumerable multi-colored filaments, some delicately curving, some rigidly straight, some curled up tightly, whose ends in turn had attached to them a wide range of small, shiny metallic attachments (hooks, bells, spangles, etc.). While ringrang sold very well in the store, I never saw them in use anywhere and never could glean what their purpose was. After I learned the rudiments of the Forkese language, the Forks tried to explain the purpose to me, but I still couldn’t understand.

Another noteworthy quality to the restaurant was that the menu offered more than 5,000 dishes. Every single dish was derived from snails. You can supplement this amazing fact with the information that, in the Land of Forks, the species of snails living in the neighboring forests, ponds, and mountains numbered in the thousands. The varying forms of these snails were surprising. One type could create a kind of music by vibrating its radula. Another gastropod was able to escape predators by leaping from trees and floating safely to the ground by extending string-like appendages connected to its detachable shell to form a kind of parachute. Some snails were gargantuan, as large as human heads, while others were extremely tiny. One salad was served with the vegetables topped by a thick layer of a species of nearly microscopic black snail, giving the effect of being caked with pepper.

2. The Forks do not eat with forks. They use their fingers (seven on each hand).

3. The Forks did everything standing, so they had no chairs. They were kind enough to build me one (they built me a bed too), and I sat on it often while I worked at the restaurant.

4. My job mostly was overseeing a popular betting game. The game was different than anything we have in the human world. I am happy I could remember the rules after I woke up. Krischtmascht, as the game is called (I remember it because it sounds somewhat like “Christmas” but the stress is on the second syllable and each of the consonants in both “scht”s needs to be pronounced distinctly) resembles games such as Boules or Shuffleboard or Horseshoes or Curling in that objects are thrown or slid toward a target and players use a strategy of knocking out the objects previously thrown by opponents. The objects thrown/slid in Krischtmascht were thin, circular, wooden disks, about the width of a (human) hand. The players slide the disk from one end of a long rectangular wooden playing surface toward the other. The polished surface is divided by lines to mark off ten spaces of increasing scores: 10, 20, 30, etc. up to 100, which is the goal. A region past the goal is designated as the Dead Zone. Players each have three disks and take turns throwing or sliding them across the surface to the goal until they use all their disks. If a disk lands in the Dead Zone, the player loses.

An innovation in this game is manifested in two sets of hinged wooden panels, ten panels in each, set at face level to each player, attached to the top of a lacquered wooden pole. The panels of each player are turned away from his opponent such that the players can’t see each other’s panels. On the panels, painted in green snail-blood ink, is written the same numbers as those on the playing surface (that is, 10, 20, 30, etc.). When a player is about to throw or slide his disk down the playing surface, the other player predicts where the disk will land. If the player predicts correctly, he wins half, all, or double the number of points, depending on which version of the game the players choose before the start of play. Predictions made by a player are based both on comprehending the skill level, as well as guessing the tactics and potential duplicity of, his opponent.

The game was fantastically popular. I was in charge of superintending, refereeing, and paying out sums to the winners.

You won’t be surprised to learn that Forkese money is comprised of various pieces of metal molded in the shapes of snails.

5. Charlie’s Fork’s daughter (who also had no name I remember, so I’ll call her Forkatina) took a special liking to me. Charlie nervously asked me to marry her. And there was a moment, whose details are lost, when the young Forkatina crept shyly up to my room at night and I learned the glowing tines of the Forks could be used to administer pleasure as well as pain.

6. I ultimately turned down the offer of marriage. My decision came when I experienced a sort of dream-within-the-dream where I foresaw Forkatina’s and my future together. We would have many children, all with nubby tines that were a compromise between the normal long tines of the Forks and my nonexistent ones. Life would have been good with her; my experiences in the Village of Forks would overall be salubrious and pleasant. But ultimately I knew that I wasn’t supposed to be there. It was not my destiny. To follow that, I needed to be among my own people.

I regretfully informed the good-hearted Charlie Fork and lovely Forkatina that the time had come for me to leave.

At the end of the dream, all the Forks gathered on the road to bid me an emotional farewell.

Then I set out again on the road toward Home. 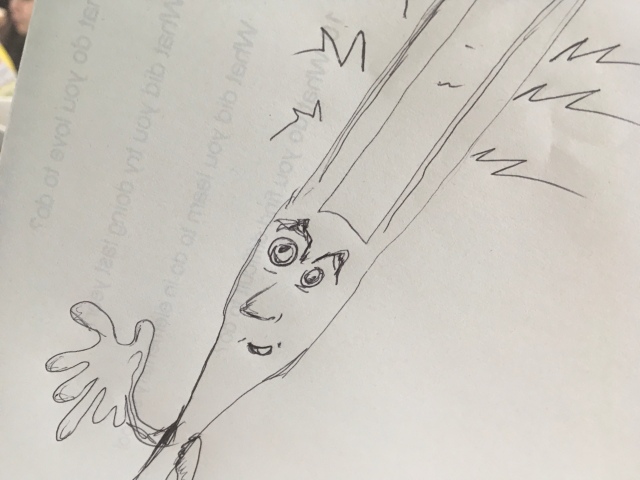 NOTE: My nine-year-old son helped me to “remember” some details of this “dream.”

You can get a copy of my historical fantasy novel The Language of Bears, which has nothing whatsoever to do with “Forks” dream above, through Amazon.com.

One thought on “LOST IN THE LAND OF FORKS PART 2”