Just an update on this Goodreads joint, with whose intriguing subtleties and potential I am cautiously becoming acquainted. As shown in the picture below, the number of people who have “signed up” for the “sweepstakes,” by which they have a chance to win one of 100 gleaming new copies of the Kindle version of my novel The Rabbit Skinners, is 91. These high-class readers have signed up in the first 24 hours of a two-week venture (using sophisticated math, I have determined that 13 days remain). I’m not sure if the vagaries of the Goodreads algorithms include a quality along the lines of “first come, first serve,” but if you’re interested in having a chance to read my book on your Kindle for FREE, using a process that is FREE, with absolutely no obligation whatsoever, I recommend signing up sooner rather than later. What, my friends and countryfolk, do you have to lose?

(It helps to select “mysteries,” then “recently listed,” then “show all”) 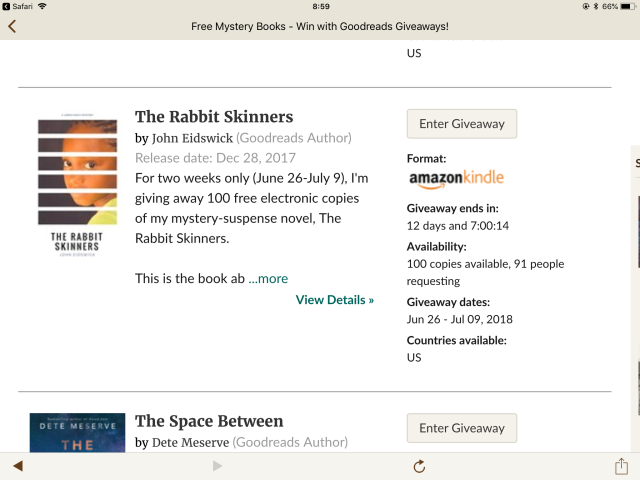 Praise for The Rabbit Skinners:

Eidswick (The Language of Bears, 2017) portrays his protagonist with great depth; Strait is a stoical combination of grit and emotional vulnerability. In addition, the author artfully raises provocative questions about the fraught relationship between race and institutional power. Finally, there’s plenty of gripping action here, cinematically depicted. – Kirkus Reviews

Part of what makes The Rabbit Skinners more than a one-dimensional mystery surrounding a kidnapped child is that John Eidswick takes the time to explore small town relationships, from infidelity and dubious friendships to the social and political connections that make or break a small town’s people. Mystery readers will find it a compelling read from beginning to end.  – Midwest Book Review